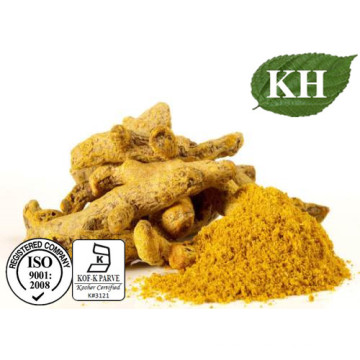 
Turmeric (Curcuma longa)is a rhizomatous herbaceous perennial plant of the ginger family,Zingiberaceae.  It is native to southwest India, requiring temperatures between 20 and 30 °C (68 and 86 °F) and a considerable amount of annual rainfall to thrive. Plants are gathered annually for their rhizomes and propagated from some of those rhizomes in the following season.
When not used fresh, the rhizomes are boiled for about 30-45 minutes and then dried in hot ovens, after which they are ground into a deep-orange-yellow powder commonly used as a spice in Bangladeshi cuisine, Indian cuisine, Pakistani cuisine and curries, for dyeing, and to impart color to mustard condiments. One active ingredient is curcumin, which has a distinctly earthy, slightly bitter, slightly hot pepperyflavor and a mustardy smell.

History and etymology
Turmeric has been used in Asia for thousands of years and is a major part of Siddha medicine. It was first used as a dye, and then later for its medicinal properties.
The origin of the name is uncertain, possibly deriving from Middle English/early modern English as turmeryte or tarmaret. There was speculation that it may be of Latin origin, terra merita (merited earth).
The name of the genus, Curcuma, is from an Arabic name of both saffron and turmeric (see Crocus).
Pronunciation:
Turmeric is sometimes pronounced without the earlier "r". Many people pronounce it as, as if it were spelled "Tu-mer-ic".

Botanical description
Appearance:
Turmeric is a perennial herbaceous plant that reaches up to 1 m tall. Highly branched, yellow to orange, cylindrical, aromatic rhizomes are found. The leaves are alternate and arranged in two rows. They are divided into leaf sheath, petiole, and leaf blade. From the leaf sheaths, a false stem is formed. The petiole is 50 to 115 cm long. The simple leaf blades are usually 76 to 115 cm long and rarely up to 230 cm. They have a width of 38 to 45 cm and are oblong to elliptic, narrowing at the tip. Inflorescence, flower, and fruit: In China, the flowering time is usually in August. Terminally on the false stem is a 12- to 20-cm-long inflorescence stem containing many flowers. The bracts are light green and ovate to oblong with a blunt upper end with a length of 3 to 5 cm.
At the top of the inflorescence, stem bracts are present on which no flowers occur; these are white to green and sometimes tinged reddish-purple and the upper ends are tapered.
The hermaphrodite flowers are zygomorphic and threefold. The three 0.8- to 1.2-cm-long sepals are fused, white, have fluffy hairs and the three calyx teeth are unequal. The three bright-yellow petals are fused into a corolla tube up to 3 cm long. The three corolla lobes have a length of 1.0 to 1.5 cm, and are triangular with soft-spiny upper ends. While the average corolla lobe is larger than the two lateral, only the median stamen of the inner circle is fertile. The dust bag is spurred at its base. All other stamens are converted to staminodes. The outer staminodes are shorter than the labellum. The labellum is yellowish, with a yellow ribbon in its center and it is obovate, with a length from 1.2 to 2.0 cm. Three carpels are under a constant, trilobed ovary adherent, which is sparsely hairy. The fruit capsule opens with three compartments.
Biochemical composition
The most important chemical components of turmeric are a group of compounds called curcuminoids, which include curcumin (diferuloylmethane), demethoxycurcumin, and bisdemethoxycurcumin. The best-studied compound is curcumin, which constitutes 3.14% (on average) of powdered turmeric. However, there are big variations in curcumin content in the different lines of the species Curcuma longa (1-3189 mg/100g). In addition, other important volatile oils include turmerone, atlantone, and zingiberene. Some general constituents are sugars, proteins, and resins.

Email to this supplier